Never went into a big race so relaxed…

I arrived to France 6 days before the race. The plan was having a bit of training vacation in the mountains followed by race as I usually always like combine races with holiday time. 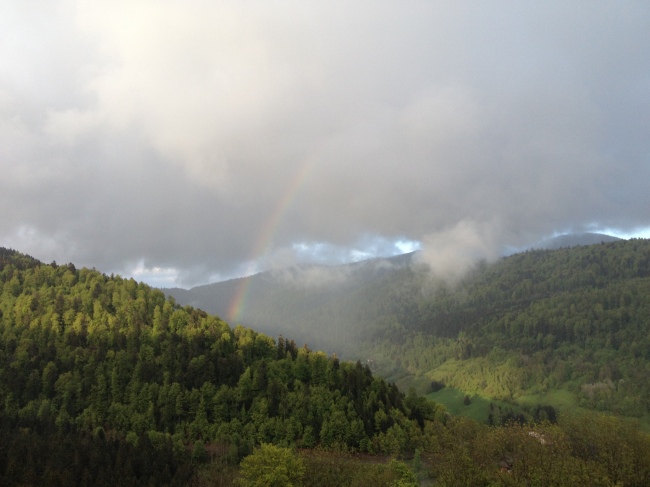 First 4 nights we stayed up in the mountains in the National Park Vosges, in the area called Bussang. The hotel called Azureva Bussang was in the altitude above 1000 m and I can strongly recommend it.  It has also 20m pool, sauna and hamam…what else would triathletes want? This was our little Altitude Training Center as Jony called it. 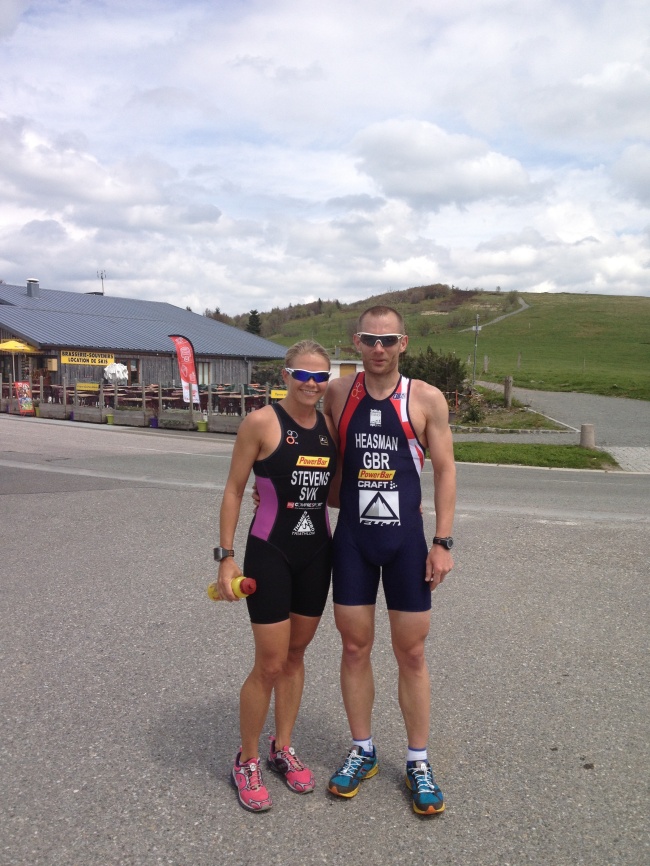 The bike training was absolutely beautiful in this area, it was difficult to stick to taper plan, all we wanted was riding long every day.Couple of days before the race we moved closer to the venue. Driving through the mountain, Ballon de D’Alssacy, the thermometer in the car showed 2 degrees C, which was the coldest it has been since we arrived and weather forecast wasn’t promising any improvement towards next few days. We went straight to the lake Malsaucy, north from Belfort, where the swim was meant to take place. Standing there with my Zone3 wetsuit, socks and shoes on, it took us some time to get into the water with outside temperature 6 degrees. I must say, yes it was cold, but it wasn’t the coldest swim this season, as swam few times in my local Shepperton lake in Surrey, where temperature was about the same.

By the lake there were some discussions about shortening the swim due to the cold temperature, however no mentions about canceling at all.

Same day, the rumors followed by official statement of ITU came out that swim has been completely cancelled due to low water temperature combination with low outside temperature. Course was now changed according the ITU rules to Long Distance Duathlon Distance. That was a big disappointment and various doubting thoughts started to play with my mind. From that moment I was feeling totally relaxed about this race while duathlon is quite unknown discipline for me and my ankle niggles since April which forced me to stop running completely 2 weeks prior the race.

Standing on the start line wishing each other last good luck with Anna Murawska next to me and gun shot started the duathlon. I saw a girl having a nasty fall right after the start falling over the cables, which were left by organizers uncovered. Later I found out it was poor Anna:-(.

I was running easier pace (4:18min/km, little slower than my 1/2 marathon pace) as I knew my legs didn’t run for a while properly and there is still faire bit of hilly riding and another longish run.

I couldn’t decide what to wear for this cold weather with expected rain showers, not just prior the race but until I reached transition from first run. I filled up my transition bag with 2 choices, winter proper goratex jacket and second choice, I ended racing in Zone3 trisuit  representing Slovakia, arm warmers and thin windbreaker , full gloves and toe covers.

The clothing choice worked out really well in the end and I wasn’t feeling too cold apart from the fast descent in the middle of the bike course. Luckily it didn’t rain and only rode through massive thick cloud on top of Ballon D’Alssace which made descending apart from wet surface more technically difficult.

The bike course was absolutely beautiful with total elevation gain of 1200 metres.

After  riding about 13 km I got my legs strength back and felt great all the way.

My coach Tom Benett from T2Coaching let me ride almost all my rides in Surrey Hills fighting my way through in all weather conditions what gave me lots of confidence in the hills which I was always missing. Just app. 3 km before the l3 km climb I lost my bottle passing through cobble stones, while I had nothing left in my aero bottle and was very thirsty at that momentL. I tried to stay positive and told myself “well I was at least lighter for the climb.” At the top of the mountain I saw through the thick fog  looooong expected aid station where I finally got hold of the bottle.  I don’t like to experiment with new nutrition other than Power Bar that I am used to on the race day, so I sticked to the water.

I saw 2 AG girls before the start of the climb taking the lead, so I decided to take lots of risks and rode down the switchbacks like demon possessed. Passed first girl in the middle of descent and second girl just at the end of descent. Managed to keep clear of the girls until I reached transition where I met another AG chick from GB team who run off app 20 seconds ahead of me.

The second run consisted from 2 laps, quite hilly course, but very beautiful around the lakes, most of it was on the soft stony surface.

I tried to stay close to Niki Bartlett (GB AG athlete) who run out of transition pretty fast. Soon after 3km she started fading, where we exchanged few friendly words while passing her.

I usually enjoy running off the bike in triathlons however this duathlon was hurting. Approximately 10km into the run I was passed by Penny Gardiner (very strong AG 45-49, we raced IM Wales together). Penny was slowly increasing gap between us.

When I first started triathlon and got to the point when I was passed by other female competitor, I mentally and physically switched off. Over the last couple of years my attitude totally changed and I became competitive as ever. I struggled few times with having “lack of breath” or kind of spasm where I couldn’t get any air in my lungs. It’s weird feeling, happened to me in couple of races and don’t know what causes it. After I managed to sort out my little breathing issue I was closing down the gap between Penny and me and passed her again app. 3km to go.

Running into the finish line I passed few girls, however the course being 2 laps you kind of loose track who is on first or final lap. I run as hard as I could all the way, not knowing where am I in terms of finishing place.

I only found out that I became age group World Champion when teammate from T2coaching Tamsin Lewis posted a tweet while I was enjoying post race massage:-).